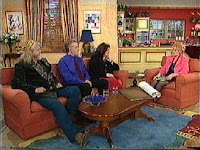 Photo shows Stephen Thomas (in the blue shirt) as a guest on the Gloria Hunniford Show.
Posted by GenWizard at 4:28 PM